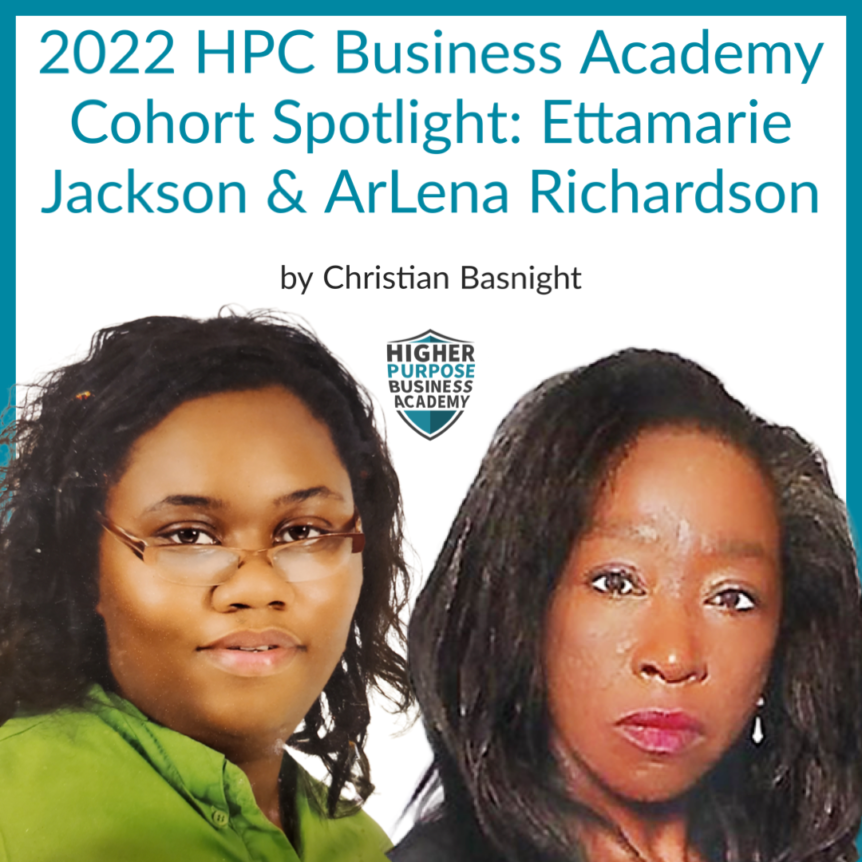 Last month, Higher Purpose Co. wrapped up its 2022 Business Academy Cohort. It saw 20 entrepreneurs complete a seven-week program anchored by HPC’s culturally relevant curriculum, business growth support, and business funding network. To be considered for the Higher Purpose Business Academy, entrepreneurs must be a Higher Purpose Business Member, have a Black-owned for-profit business, and reside in Mississippi. In addition, the businesses must also be in its early stage of growth within HPC’s priority business sectors.

Ettamarie Jackson, founder of Jaze Educational Group, and ArLena Richardson, owner of the ArLena Richardson Agency Group, were among the entrepreneurs selected to be a part of the fifth academy cohort.

“Early childhood is my passion. It’s something that I love,” Jackson said. “If I could do it for free, I would.” Jackson’s passion for early childcare ignited after she became a mother herself to three children.

While Jackson and Richardson are in the early stages of their new business endeavors, both have previous entrepreneurial experience. With her Action Jackson Consulting program, Jackson offered business development, management, and advisory information for non-profit child care organizations and afterschool programs. Meanwhile, Richardson started The ArLena Richardson Agency in 1990, which has helped retired professional athletes monetize their sports participation. Richardson recently shifted much of her focus from legacy marketing to now assisting collegiate athletes to capitalize on their NIL.

“This new business is in a very embryonic stage, working with student-athletes,” Richardson said. “But I also saw it as an opportunity to take this previous experience I’ve amassed to enrich their college experience.”

Last year, the NCAA permitted its college athletes to monetize their NIL after previously being prohibited from receiving compensation for their sporting successes. Richardson turned to Higher Purpose Co. for assistance with her newest endeavor so she can best help collegiate athletes cash in on this new opportunity.

Both Jackson and Richardson took a few gems from brand strategist Tatiana Baker’s module, accentuating branding as a crucial investment for business. Richardson initially felt challenged with pivoting her brand from a legacy marketing perspective to her newer NCAA-NIL path. However, Richardson believes Baker’s presentation helped her look at the enterprise with a fresh perspective.

“Instead of trying to commingle the branding, she told me that I should look at it with a fresh eye and as a completely new business,” Richardson said. “I’ve now created logos, sales messages, and things that are specific to that [college athlete NIL enterprise].”

Baker also emphasized that cohort members consistently create content to promote their businesses better. This advice especially resonated with Ettamarie, who has recently pushed to advertise her business more.

“It’s hard for me to put my face out there to accompany my business because I’m an introvert,” Jackson said. “This summer, I’ve plunged in and started creating videos for Jaze to post on different platforms.”

Academy members also experienced a two-part module by Black business activist Danielle McGee, centered on creating and structuring a solid business plan. McGee highlighted the importance of forming a business plan while also revealing some essential components that should be included. Richardson believes this insight will help her learn from previous business-related pitfalls.

“​​Previously, I didn’t have a business plan because I didn’t think it was important,” Richardson said. “But, after going through the academy, I’ve realized that it’s more than just knowing how to put a business plan together, but it’s important to know how that plan can be used beyond trying to get funding.”

Richardson will also incorporate what she learned from Eric Armstrong’s Business Technology Bootcamp session, using tech to transverse her geography and attract clients from all across the country. Meanwhile, Jackson was interested in the financing discussion with certified financial planner Jason Howell. Howell urged Academy members to separate personal finance from business and to be more mindful of their enterprises’ cash flow.

“The financial parts of the academy were beneficial,” Jackson said. “It helped me to understand how I need to structure the business financially with the bank exactly and how to look for those other incentives for my business that will help later on down the road.”

Jackson currently works full-time with the Jackson Public School district. However, she hopes to focus fully on Jaze and her other business endeavors eventually.

“My goal is to get Jaze up and be that middle person between the childcare provider and the families/the state to offer quality programs.”

Jackson is a mother of three children, two of whom have autism and dyslexia. She is currently working on kickstarting her Magnolia Oak Micro school, which specializes in assisting children with intellectual disabilities. She hopes to open the school by January 2023 with an after school program under the same name.

Meanwhile, ArLena continues to forge her new business path and is currently constructing a business plan for her NIL student-athlete initiative. Richardson says she’s taken what she’s learned in the academy and is “doing the work.” Both Jackson and Richardson believe their time with Higher Purpose has allowed them to grow their extensive knowledge about entrepreneurship.

“I actually love being a member of Higher Purpose,” Jackson said. “I can’t wait for the meetings because I’m eager to learn something new, and add to the information that I already know.”

“The Higher Purpose Business Academy has armed me with everything I need to launch this new business,” Richardson said. “I am a seasoned entrepreneur and still found value in the academy.”

Higher Purpose strives to facilitate a surge in Black entrepreneurship, which coincides with its mission of eliminating the racial resource gap and creating generational wealth within the Black community.

“In other communities, they circle their money around before it even comes out of their circle,” Jackson explained. “Hopefully, one day, a goal for us as the Black community is to have money to circle around, if not seven times, as much or more, so we can help each other.”