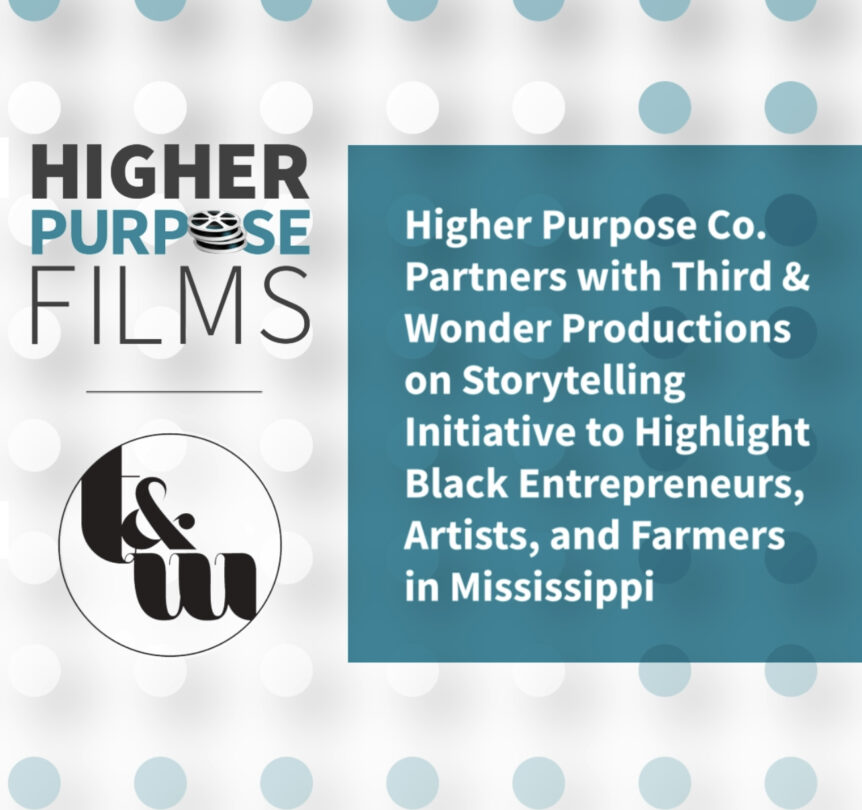 Black storytelling is an essential part of our mission at Higher Purpose Co (HPC). Our goal is to tell compelling stories that educate, uplift, inspire, and positively shed light on our communities in Mississippi.

Third & Wonder is an Atlanta-based, women-led media and production company owned and operated by entrepreneur and television producer Diamonde Williamson. T&W specializes in documentary series, unscripted formats, and branded content for and about Black women and Black culture.

Williamson, along with HPC Director of Branding, Storytelling, and Advocacy, Ivory Cancer, will oversee this historic initiative.

Cancer said, “Working with a Black women-led company is exciting because the work we’ll produce through the partnership will be an opportunity to address and highlight stories that could lead to change that positively impact the state of Mississippi.”

In November 2021, Williamson, her associate producer and camera operator, traveled to Mississippi to direct a three-part mini-documentary series of Higher Purpose Co. This visit led to this historic collaboration of Higher Purpose Films and T&W Production House. Williamson is a former producer for VH1, USA, WETv, and OWN.

Higher Purpose Films officially launched Monday morning with its new docuseries titled, Past, Present, and Future of Higher Purpose Co. This three-part mini-series tells the story of how HPC started, where we are now, and what we hope to see for HPC in the future. In addition, the viewers will learn a little bit of history about the city of Clarksdale, HPC business members, and staff.

Part one of HPC’s series here. It highlights how HPC started and tells the story of Dorfus and Ernestine Young, owners and operators of Young Family Farm in Clarksdale.

“I am looking forward to every part of this initiative,” said Cancer. “Another great note is that we can be beacons of light through it all for the intersections we find ourselves in.”

Williamson added, “I’m just so excited. I mean, Higher Purpose is doing the work, and so I’m excited to be in partnership with people who are doing great work in a place that my family has called home.”

Higher Purpose Films unapologetically focus on social and economic justice topics related to the Black experience in Mississippi. HPC believes in amplifying the stories of Black entrepreneurs, farmers, and artists in its communities that will uplift and inspire the next.