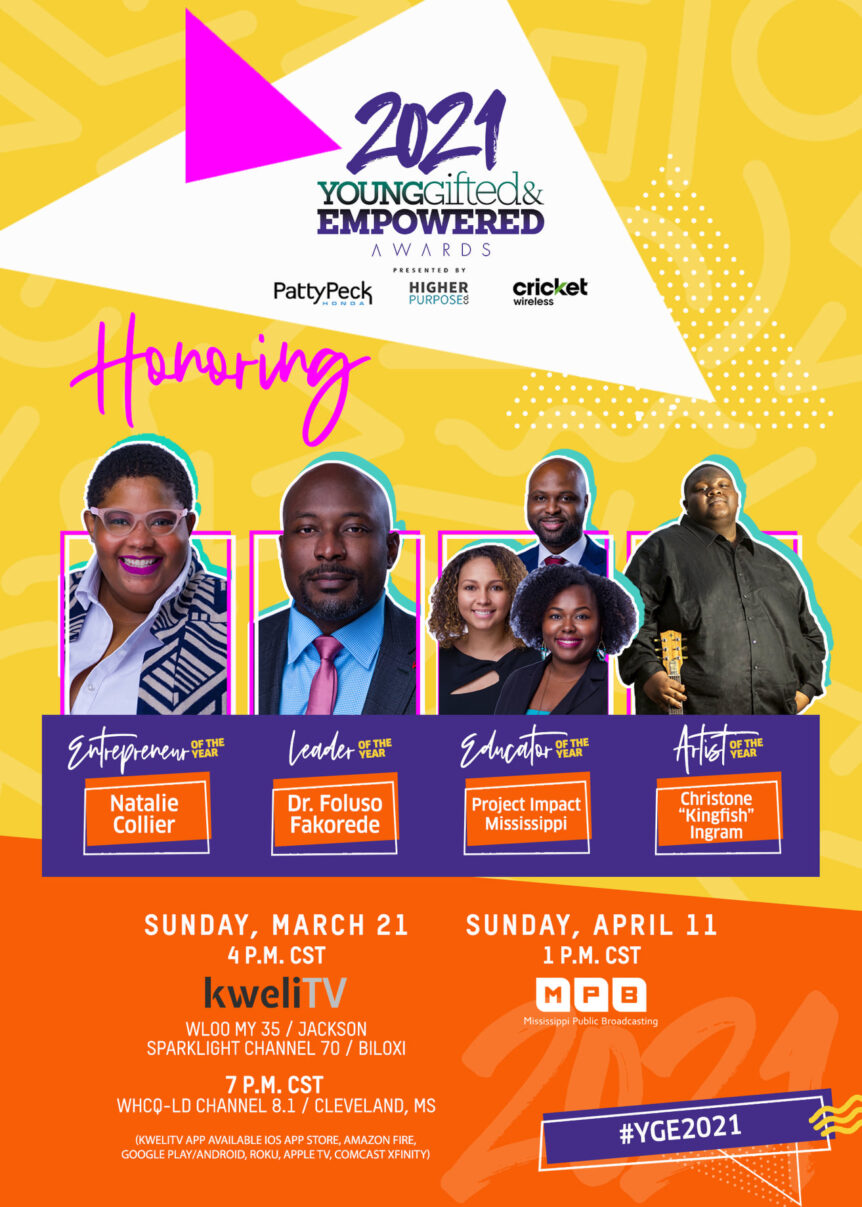 MISSISSIPPI — The Young, Gifted, and Empowered (YG&E) Awards is back for its seventh year with its newest title sponsor, Higher Purpose Co, along with Patty Peck Honda of Jackson and Cricket Wireless.

YG&E is a nonprofit that was birthed to tell stories of successful, progressive, young African Americans from Mississippi. It was founded by Mississippi native, Shameka Reed.

Every year, YG&E honors four to five individuals who have made a lasting impact on a local and national level. The 2021 honorees are Project Impact Mississippi as Educator of the Year, Natalie Collier as Entrepreneur of the Year, Dr. Foluso Fakorede as Leader of the Year, and Christone “Kingfish” Ingram as Artist of the Year.

The award show will air on WLOO My 35 in Jackson, Cable One Channel 70 in Biloxi, and a streaming app called KweliTV on Sunday, March 21 at 4 p.m. CST. It will air again on Mississippi Public Broadcasting on April 11 at 1 p.m. CST.

Reed said, “One of the things I want people to know about this year’s awards is that the stories we are telling are just as impactful, and the way that it will be presented this year, I think people will be very pleased with it.

I think anyone who watches will be proud of what we have created, and they will be proud that it was created in Mississippi. I think it will bring a lot of needed attention to stories that need to be told from an African American perspective.”

Reed’s vision for YG&E came shortly after the death of Trayvon Martin. She felt motivated to change the narrative of how Blacks are viewed in the media and wanted to tell more successful and impactful stories of African Americans from Mississippi between the ages of 25 to 45.

“It was about eight years ago when George Zimmerman was acquitted of the murder of Trayvon. I remember watching that and feeling so helpless. I did not like the way Trayvon was portrayed in the media, so I began to think about how African Americans are always portrayed in the media. I have always felt that my role was to change the narrative in the media,” Reed said.

Lampkin said, “ I’m really excited HPC is able to strengthen our partnership with YG&E to celebrate Black excellence across the state. This event provides a platform to embrace our cultural power and change the narrative about Mississippi.”

To learn more about The Young, Gifted, and Empowered Awards, visit YoungGiftedAndEmpowered.com.