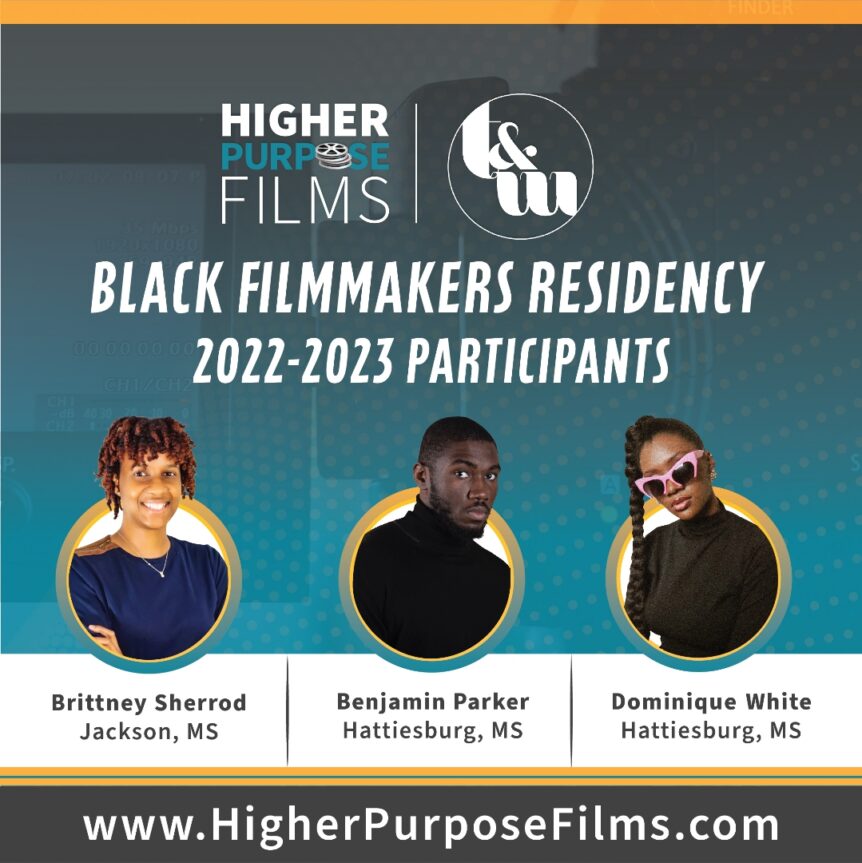 The Filmmakers Residency Program allows three aspiring filmmakers the opportunity to be mentored by some of the best professional filmmakers in Mississippi, gain the skills and techniques needed to make it in the film industry, work on a documentary project from start to finish, and learn what it takes to create the documentary of their dreams.

Over 50 Mississippi filmmakers applied for the residency program. The three participants are Brittney Sherrod of Jackson, Dominique White of Hattiesburg, and Benjamin Parker of Hattiesburg.

Through the program, Higher Purpose Co’s Director of Branding, Advocacy, and Storytelling, Ivory Cancer explains, the chosen filmmakers will work on one documentary with entrepreneur and television producer Diamonde Williamson of Third & Wonder Production House.

“During the seven months of the program, the cohort will produce a documentary centered on the intersection of food and health in Mississippi,” said Cancer. The film will feature Higher Purpose Business Members who specialize in the food and health industry.

The selection of the cohort was a collaborative effort between Cancer and Williamson. Cancer said, “It was tough selecting only three because we had so many great applicants. Each participant’s application gave a strong sense of interdisciplinary creation and showed interest in doing work that intersects social and economic issues of Black people.”

Cancer continued, “Though they all share the appeal of working with documentary film, they each bring something different to the program that has the potential to enhance their journey. Hopefully, this will allow for the creation of stories that are diverse in foundation but unified by a common goal of crafting and sharing compelling stories of Black Mississippians.”

Sherrod, White, and Parker expressed how passionate they are about storytelling and bringing change to their home state.

Sherrod wants to tell stories that are real to the Black community while also shedding light on issues that are stigmatized and challenging to speak on. In a recent interview, Sherrod said, “I want to make films because it gives me the power to share and create the narratives I want to tell with little to no limitations.”

White has worked on fashion films and music videos. White’s goal is to contribute light and to forward movement everywhere. White said, “I believe film work to be a highly influential tool and when used correctly, can shift paradigms in the thinking of our society.”

Parker wants to tell stories that build sustainable and equitable communities. He said, “I believe that telling stories can ameliorate these injustices and turn Mississippi into an economic marvel. I want to change the narrative that if you’re young, gifted, and Black that you need to leave in order to be successful.

Cancer said, “I am looking forward to continuing our partnership with Third & Wonder in a way that continues to bring together Black creatives to do the work that speaks to the stories of Mississippi.

Through owning our narratives and exploring the possibilities of a more equitable way of life, I hope everyone involved with this program gains insight and connections that drive a continued spirit of action among us all.”

Higher Purpose Films launched in November 2021 with its three-part docuseries titled, Past, Present, and Future of Higher Purpose Co. HP Films is supported by Kellogg, Surdna, and the Jessie Smith Noyes Foundation.

Higher Purpose Films believe that stories told by and about Black people are essential to a more just and equitable work. With the residency program, HP Films hope to cultivate more powerful stories and empower a new generation of storytellers.